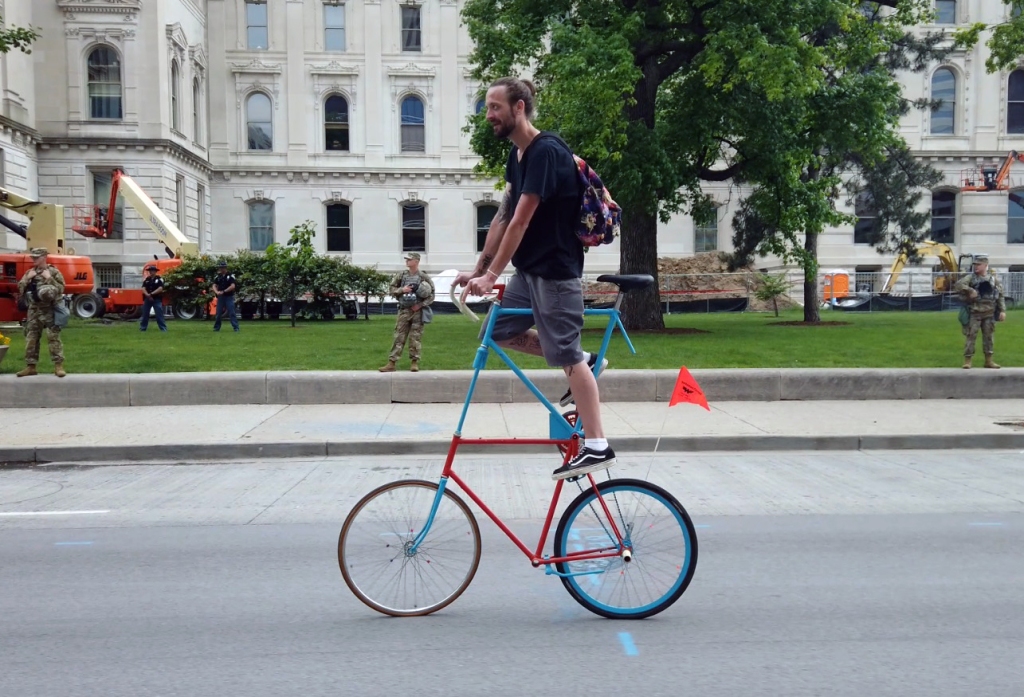 Demonstrations were still running strong on Tuesday and Wednesday after protesters and police hugged it out in front of the Governor’s mansion on Monday night. I got so much footage from those two days and prior that I stopped videoing downtown.

Having the luxury of setting up a portable office on a screened in deck in Watercolor Florida while healing up from some road rash obtained in the Smoky Mountains, I was finally able to get some editing time and catch up.

The footage looked great chocked full of many good sets and scenes. There were colorfully clad protesters who looked like they came right out of the dystopian film, “The Running Man” starring Arnold Schwarzenegger & María Conchita Alonso.

Motorcycles covered the front line and headed up the rear, with skateboarders mostly up front and bicyclists spread out.

At the front of the protesters were the megaphone masters dropping lines and mixing up chants. They kept everyone reciting on time and could silence the group or rouse them to cheers on cue.

The cops backed off for the most part hanging mostly on the outskirts. The only real incidence occurred early into the march on Wednesday when a guy took a sharp turn at an unsafe speed too close to pedestrians including myself and some bike cops. He was apprehended, but I’m not sure what happened other than I told the police I didn’t want to press charges.

At one point in the evening, drones were spotted hovering over the protesters. No one is sure who the pilots were, but they were far from appreciated.

The press was in tow Wednesday evening. Real News Indy was in the mix along with a couple local TV news groups and some other independent individuals. I even ran into an intern with the Young Turks.

Again, I started running out of battery power 4 hours in. As the protesters made their way back to the Circle, I took one last shot of them and headed back to my Jeep.

On the way out of downtown, I spotted a rainbow. The first time I tried to capture it, my phone died because it wasn’t charged enough. Determined to get the shot, I let the Jeep run while the phone charged. Around 13% I got out and got the shot.

We never know exactly what we are going to experience going into any given situation. As much as we may try to deduce what lies ahead, the world is full of surprises that sometime takes sudden sharp turns. If the turn is too sharp, your board is going to slide, but with enough practice, you eventually won’t fall off and maybe even enjoy the ride.

iThere are no comments

Begin typing your search above and press return to search. Press Esc to cancel.